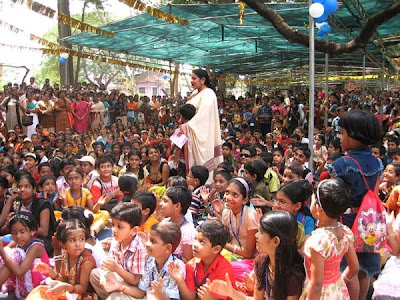 'Sargotsavam' a two-month long summer camp for children upto the age of 17 is an initiative from 'Jawahar Bala Bhavan' in Thrissur. An autonomous organisation affiliated to Government of Kerala, over 1,200 students from different parts of the state are attending this camp to explore traditional arts, dances, music and even martial arts. The camp inaugurated by Smt. K.P.A.C Lalita on the first of April 2010, is aimed at providing young children an opportunity to interact with students from different regions of the state.

Shri P.N Bhaskara, principal of Jawahar Bala Bhavan announced a special workshop to sketch 'my river' on 23rd April to enhance the undertanding of students about rivers and to contribute to the competition organised by Nila Foundation. The sketches will compete to be amongst the forteen select images that will adorn the introductory pages of the 14 chapters of the book Puzha Malayalam. The book is to be released on the 05th of June 2010 at Thunjan parambu in Tirur, which is also a day celebrated by the United Nations as World Environment Day.

The last date to send in the sketches for the competition is 25 Apr 2010. Check here for more details.
Posted by Nila Foundation at 3:05 AM