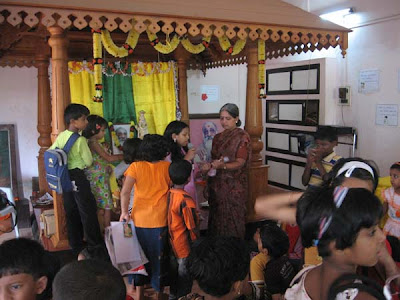 'Prakrithi' summer camp and Chinmaya 'poonkavanam' are the two new entrants to join the series of workshops to do sketches on the theme 'my river'. Prakrithi camp will be organised at Government higher secondary school in Karuvanpoyil in Kozhikode district on the 12 Apr 2010. Workshop will start at 10.30.

Chinmayam mission's summer workshop has been going on for last ten years and this year there will dedicated sessions for youngsters to sketch their interpretations of rivers. the two weeks camp will be conlucded on the 20th Apr. Both the workshop entries will be competing with other entries that are participating in the "My river" sketching competition organised by Nila Foundation.

14 selected sketches will be used to adorn the introductory pages of 14 chapters of the book Puzha Malayalam authored by C.K Sujith Kumar and K. Umadevi. The book is to be released in Thunjan Parambu on 05 June 2010 which is also the world environment day.
Posted by Nila Foundation at 11:58 PM